Advanced Origami by LaFosse and Alexander

Advanced Origami by Michael LaFosse and Richard Alexander was first published in 2005 as a hardcover book. I didn’t own it but had once borrowed from a friend and loved it. So when I received a pre-released, complimentary copy from Tuttle Publishing recently, it was such a pleasant surprise to acquire it and learn that it was re-released as paperback. This updated version is lighter weight and includes a DVD. Advanced Origami has a new cover design too. 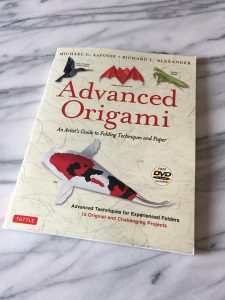 15 projects, which are all natural history subjects, and LaFosse’s signature models are included in this book. “Advanced” Origami doesn’t necessarily mean complex models; in fact, some of the included models are rather simple, and most are intermediate to high intermediate. They are realistic, aesthetically pleasing models. Rather than focusing on complexity, this book is more about higher quality in work, such as by carefully choosing paper, preparing, and folding with special techniques. It is written for experienced folders who are seeking to advance their folding techniques.

Here is a simple yet elegant model with color change, North American Cardinal. 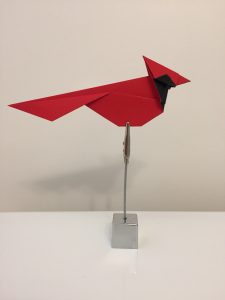 And here is one of the two bat models included in the book, called Happy Good-Luck Bat. 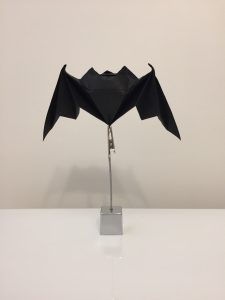 This tiny Origamido Butterfly was added to a bouquet I brought to a friend recovering from sickness.

Aside from the included models the authors explain in details with photos about curved folding and wet folding, paper qualities, how to choose the right paper, back coating tissue to foil, adding surface color, how to make paper and paper pulp recipes. Everything is very well informed with photos. These info are so valuable, since there aren’t a lot of such resources available in other books or online, as far as I know.
For each model there is a beautiful prototype photo, an explanation as to what inspired LaFosse to create the model, and paper suggestions. Diagrams are very clear and well explained, but just in case that you get stuck, or want to add that finishing touch that’s missing in the diagrams, there is that DVD.
Overall, I am quite impressed at how much content this book offers. Any origami enthusiasts would be enjoy not only the 15 beautiful models but also the special techniques that aren’t offered elsewhere. It seems like such a bargain at less than $20!
I look forward to trying some new techniques, including wet-folding, back-coating and adding surface color, and perhaps making my own paper as suggested in this book this summer. Advanced Origami may very well become my summer time textbook.