“We are living in the most exciting era of origami!” is a quote by my origami friend and a storyteller Kuniko Yamamoto, whom I’ve interviewed in Summer 2015 issue of The Paper. This art form has come so far since the 1950s, thanks to Akira Yoshizawa and recent technology advancement. I cannot agree with Kuniko more. This book New Expressions in Origami Art by Meher McArthur really proves it. 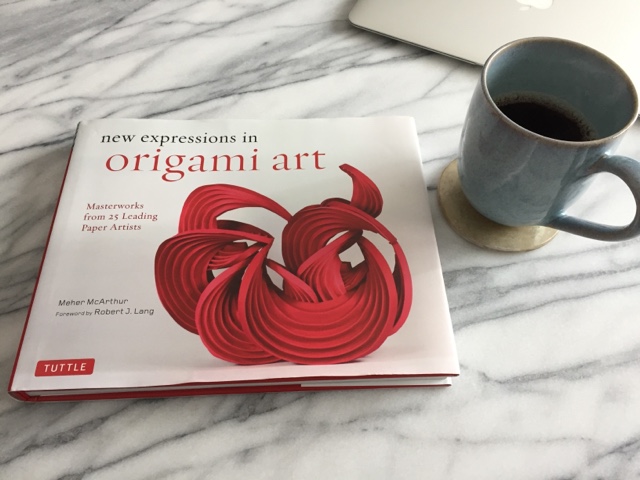 It is not only a beautiful hardcover, full-colored coffee table book to flip through and admire each and every magnificent artwork. The book is also incredibly informative. I enjoyed reading about each artist’s unique background, inspiration, approach and process for his/her origami work.

It is not all complexity that makes each origami art significant. I love that there is a very wide range of expressions covered in this book. LaFosse and Alexander, for example pursue realism in their models, given LaFosse’s natural history background. Beth Johnson on the other hand has her unique figural style that is inspired more by geometric patterning than by the physical characteristics of the creature itself.

Some featured artists, such as Miri Golan, Sipho Mabona and Mademoiselle Maurice use origami as a way of expressing their concerns about social and political issues. I really appreciated these artworks, but perhaps I shouldn’t give away too much of what’s in this book;)

Any origami lovers would be captivated by this book, but even people without any interest in origami for sure would get impressed by the magnificent works in it. I look forward to using this book to show off, tell stories and promote origami to anyone who isn’t familiar with the art form.